My ten-inch pots with a single Sarpo Mira seed potato have yellowing foliage and don't look like there's much more in them so I decided to drop one of them today and see what was inside.  The roots were very strong with a lot of potatoes looking very healthy. Perhaps they would have done a bit more. But still it gave 600g of good potatoes, more than the average of my Pentland Javelin pots. So I have high hopes for the other two pots and even higher hopes for the 30 litre bags to come later.

The empty pot has been replanted with six leeks using the same compost rejuvenated with some blood, fish and bone.

Update: The other two 10 inch pots gave 610g each. So a good average for a small pot.

Xtra!  A sprouted "shop potato" was grown in a clay pot with unimproved garden soil and a handful of blood, fish & bone. Harvested on Oct 19th it gave 880g of good size and quality potatoes. I won't be paying for seed potatoes any more!

The fridge saved pentland javelins planted in July have been harvested. They gave a fair crop of very good quality.
Posted by Doug Thompson at 22:22 No comments:

I had my first tomato in a cheese sandwich for my lunch yesterday! Gardeners Delight is well ahead of all the others in ripening terms. They seem to flower much earlier than any of the other varieties I am growing.
Posted by Doug Thompson at 17:29 No comments:

Email ThisBlogThis!Share to TwitterShare to FacebookShare to Pinterest
Labels: tomatoes

It was time to see how my ten-inch pots of Pentland Javelin were doing today. The foliage had begun to yellow (and been eaten by something too) so the potatoes were not going to grow any more. 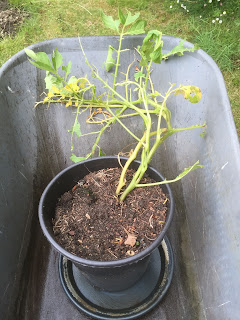 So I cut off the greens and turned up the pot.  First views looked promising. 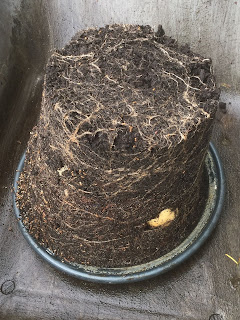 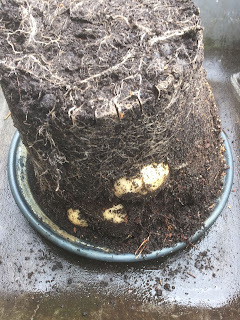 Then I noticed the extras. I was not expecting an ants nest in there! 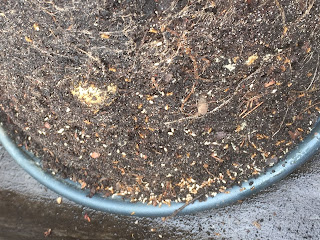 But the potatoes were not affected. A fairly reasonable crop of 441g. That's near enough to a pound for me. 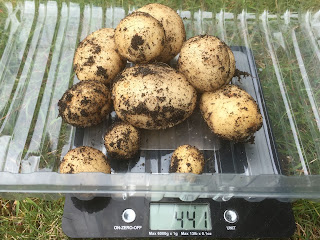 The compost is now back in the pot with a sprinkle of blood, fish and bone and another Pentland Javelin seed potato. This one was in the fridge from January till June 6th. It was then put in a yoghurt pot with some compost. It had about 3-inch sprouts when it went into the big pot today. I'm hoping this should give a crop in November. Wait and see!

On Friday. Some foxgloves have germinated and some daucus carota. (The honesty were up by Sunday.)

My godetia have suddenly been eaten - about a foot tall and no leaves. Rabbits??
Posted by Doug Thompson at 23:58 No comments: